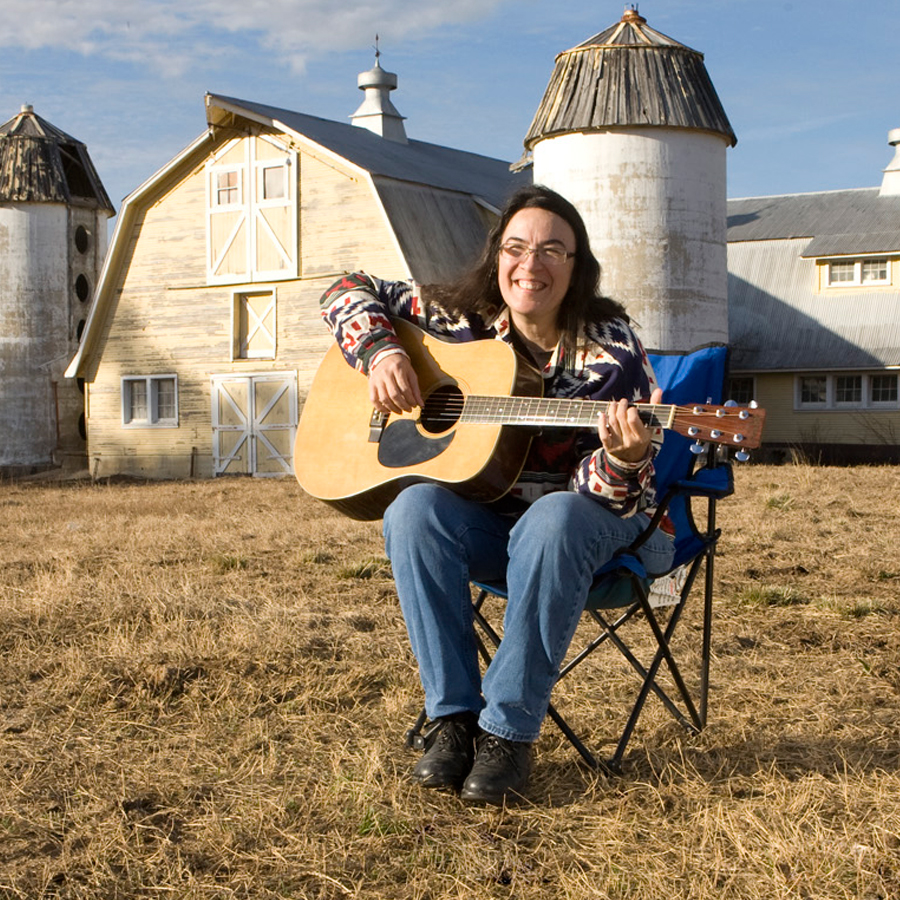 New Orleans-based Gina Forsyth is an award-winning singer/songwriter, who is known for her wizardry on fiddle and guitar. With an alto as unique as it is soulful, unpretentious songs that cut straight to the heart, and a wicked sense of humor, her live performances are legend. Considered one of the best Cajun fiddlers in Louisiana (no small feat), Gina is in demand from other great Louisiana musicians to play club gigs and festivals, some of the same talent that backs her up when she plays as Gina Forsyth and Friends. Rheta Grimsley Johnson of Daily Journal probably sums up Gina best, “If you’ve ever wondered what happened to the gutsy folk singers who used to roam the earth with their instrument and protest, check out Gina Forsyth. In the tradition of Guthrie, Dylan and Prine she is writing and singing, not just fiddling while America burns.”

She’s an Entertainer As noted by Dan Willging in Offbeat Magazine, “She’s hilarious commenting on her native, beloved South (“Sweet & Sunny South”) when she sings, ‘We love our musicians and our fascist politicians,’ then questions the South’s provincial view on gay rights.”

The Press Loves Her Glowing reviews include “Promised Land is an album no folk music lover should pass up. Well-written tunes, crisp production and instrumentation framing a message of reminiscences form a performer who does it as well as it can be done.” John McClure of Victory Music

On Gina’s 2012 CD, Promised Land (Waterbug), the title song reached #1 on the Folk DJ list in January 2012 and the CD ended the month at #3. It also made the final voting round of 50 by the Recording Academy to determine the nominees for “Best Folk Album” for the 55th Annual Grammy Awards.

Promised Land includes traditional Cajun songs, original songs with the fiddle that sound centuries old, and more timeless songs that employ a variety of guitar tunings and techniques. As noted in a review in Victory Music, Promised Land has “well-written tunes, crisp production, and instrumentation framing a message of reminiscences from a performer who does it as well as it can be done.”

Born in Florida and raised in Alabama, Gina grew up on hymns, country songs, and old time fiddle tunes. In the mid-1980s, she moved to New Orleans to study classical and jazz violin at Loyola University and quickly developed an irrevocable passion for Cajun music.

Over the last 20 years, Gina has evolved into one of the most respected folk artists in America. In 2001, cult folk label Waterbug released her debut CD, You Are Here, which was quickly heralded as “…an eclectic, beautifully played testament to choosing the right personnel and crafting a great song.” (Daily Advertiser, Lafayette, LA). She toured the US and Canada with Lisa Markley and Beth Cahill, as The Malvinas. Together the trio released three acclaimed CDs, I’m not like this (2002), Love, Hope + Transportation (2004), and God Bless the Grass (2017) In 2006, two of her songs, “Somewhere Off the Foot of This Mountain” and “St. Anthony,” were published in the venerable folk song magazine, Sing Out!

In 2015, Gina was selected as one of 24 Emerging Artists at the Falcon Ridge Folk Festival. She was then voted one of three Most Wanted to return to Falcon Ridge in 2016.

She has toured and recorded with some of Louisiana’s greatest Cajun bands, including the legendary, Bruce Daigrepont. Her fiddling appears on three of his recordings, Couer des Cajuns (Rounder, 1989), Paradis (Rounder, 1999), and Bienvenue dans le Sud de la Louisiane (self-released, 2016)

Of late, Gina has released two new full-length CDs and an EP; the new recordings feature her prodigious talents on fiddle. She returns to Cajun music with Mid-City Aces, as part of a trio with 18-year-old Cameron Dupuy on accordion and his father, Michael Dupuy, on guitar. Her 2015 release, The Fiddle EP, is a precursor to the new CD of fiddle tunes, Copper Rooster and Other Tunes and Tales, released in the summer of 2016 on Waterbug Records.